Praised as "the asset of the show both vocally and histrionically" and "surely, Ms Govednik dominated the stage" (The Gazette of Montreal and Le Devoir), the Serbian-born mezzo-soprano made her European debut as Carmen in a Franco-German co-production which toured France, Germany and Poland in 2009. Ms Govednik has since been a regular on Canadian and European stages.

During her  classical piano studies which she completed at the Belgrade Faculty of Music, Ms Govednik also discovered her love for opera.  She moved to Montreal in 2003 obtaining  Licentiate Diploma with Honours and  Master’s Degree in Voice at the McGill Schulich School of Music in the following years. At McGill, Govednik took part in all of the Opera McGill main-stage productions, starring as: Métella in Offenbach’s La vie parisienne, Zita in Puccini’s Gianni Schicchi, Mother, Dragonfly and Squirrel in Ravel’s L’enfant et les sortilèges, The Old Lady in Bernstein’s Candide, Bianca in Britten’s Rape of Lucretia and The Third Lady in Mozart’s Magic Flute, as well as various roles in the Montreal Symphony production for children,  “L’orchestre enchanté”.

Always having had a soft spot for orchestral and contemporary music,  Govednik appeared as a soloist in: Mahler's Das Klagende Lied and Dvořák’s Requiem with the McGill Symphony Orchestra; Berg’s Altenberglieder and Berio’s Folksongs with the McGill Contemporary Music Ensemble; and Mahler’s Des Knabenwunderhorn with the American International Music School Symphony in Graz (Austria).

Since moving to Vancouver in 2015, Govednik has joined the Vancouver Chamber Choir, the Vancouver Opera Ensemble and interpreted teh role of Grizelda in the East Van Opera debut-production, "Alma" by local libretist and composer A. Cocciani.

Govednik is dedicated to reviving Serbian traditional music though own classical arrangements for voice and piano. Her CD debut "Songs Of Kosovo” was released in 2012. She is also a lead-singer in a rock-fusion formation, Byzantine Blue, which blends traditional Balkan and modern Western musical styles. 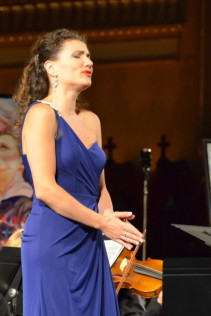